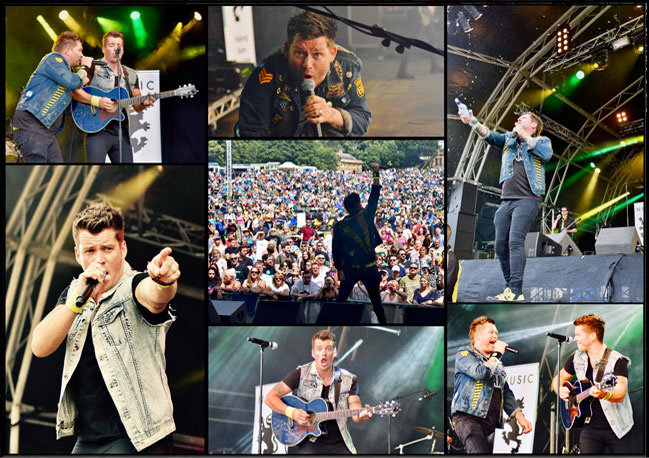 From Summer Seasons abroad to the Pub/Club circuit in the U.K, Nightclubs, Holiday Parks, Private Parties and Corporate work, Theatres and now Festivals, Brotherhood have done them all and are one of the most in demand Acts on the U.K scene today.

With 19 years experience under their belt this talented two brother duo go from strength to strength and are always pushing boundaries and updating the show to keep it fresh, energetic and exciting.

Performing up to 200 shows a year and working hard behind the scenes promoting themselves on their website and many social media outlets, Brotherhood have built up a passionate fan base to be proud of.

Brotherhood toured Ibiza for 4 years, working the Pre-Party venues. They have several gigs at the hugely popular Ibiza Rocks venue under their belt.

They have performed on shows with the likes of Scouting For Girls, The Hoosiers, The Beautiful South & Slade to name drop a few!!

2017 saw Brotherhood get the accolade of Nusics ‘Future Sound Of Nottingham’ with another 70 Nottinghamshire based musicians in contention. This culminated in Brotherhood performing in Rock City’s Main Hall in Nottingham and opening 2017 Splendour Festival Main Stage in front of 25,000 people on a bill with Kaiser Chiefs, Busted, Tony Hadley(Spandau Ballet), Billy Ocean & The Buzzcocks.

Their original material album ‘Occupational Hazard’ has had tons of radio play and their single ‘Winner’ has had plays on BBC Introducing as well as stations such as Lincs FM. Their original material is available on I-Tunes, Spotify, Amazon & all major platforms. Brotherhood have also done several live interviews with the BBC and have played their songs live on air on Notts T.V.

With many hours of material in the Rock/Pop genre they can tailor the set to suit the clientele at any given event and perform songs by acts such as Stereophonics, Ed Sheeran, George Ezra, Snow Patrol, Walk The Moon, Kaiser Chiefs, Keane, Green Day, Bon Jovi, Bryan Adams, Kings Of Leon, Robbie Williams, Olly Murs, The Killers & many, many more along with writing their own radio friendly catchy Pop/Rock tunes too.

2018 saw them Headline Nottingham’s iconic Rescue Rooms TWICE where virtually every major star in the music industry has played, they sold this show out within a few weeks of it going on sale, and they bought in a full on camera & sound production crew to capture the show which was released on DVD at the end of 2018.

2019 started with a massive show at Rock City in Nottingham and will see Brotherhood concentrating on touring the U.K, with many shows booked already, and in 2020 Brotherhood will celebrate their 20th Anniversary and already have a venue booked that will yet again push boundaries for their biggest Headline show to date.

For more info and links to all Brotherhood Social Media pages please visit:

Better still, why not contact us & check on availability for a booking in your area!!

Just a few of the Clients & Acts Brotherhood have worked with: